Nightly entertainment was provided as part of the Golympicus Games’ festivities. Tonight was the big finale to a talent show called Amazonian Idol. The final featured four contestants. Grizbut was the guest judge, and Lunii the M.C., who also played her flute. Of the finalists, the most interesting was the opener. It was Cor, Grizbut’s ex’. They hadn’t crossed paths since breaking up and Lunii expected some sort of fireworks. Sure enough, something happened. 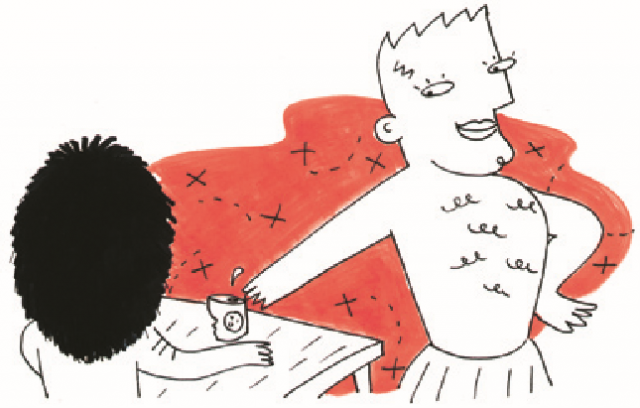 Cor had finished a can of drink. He then casually put the empty can on the judge’s table, right under Grizbut’s nose. It was his reminder of the can he’d left in her garden to disturb her sleep. As he walked away, he looked back at her with a sly grin. The look Grizbut gave him a hard stare as she remembered his annoying prank. She felt annoyed he could still trigger her.

Lunii got the show pumping with some fine flute playing, followed by an introduction in which she shared some of the show’s history. The crowd listened enthralled. “One of the things most people like about these shows are the puns. These usually get a laugh – or a groan. It has always been so, though there are exceptions. In the very first show we had ten contestants who each managed to have a pun in their performances. You would think at least one would get a laugh?” She answered her own question. “Sadly .” The crowd groaned.

Lunii introduced Contestant One. “Our first contestant is a merchant and amateur comedian. Born the youngest of fifteen children, he overcame many obstacles to achieve the success he now enjoys. For instance, growing up he was forced to wear hand-me-downs as a child. Which wasn’t so bad – except he had only .”