The crowd continued to laugh as Lunii peppered her introduction with gags. When Cor finally stood on stage, thanks to Lunii, he was given a rousing welcome.

“What Lunii says is true,” Cor addressed the crowd, “Like you all I have had to overcome obstacles. For example, in my younger days one of my first challenges was to turn a rundown inn into a success. The place I bought was called the Stradivarius and the building was shaped like a violin. I picked it up really cheaply because it was the most   around and no one drank there. The first thing I did was give it a makeover and re-launch. Still, hardly anyone came, and no matter what I did, no one wanted to drink there. I was going broke – till I got a lucky break.” He paused as he recalled. “One night a grasshopper came in and sat at the bar. I was shocked. The first thing I said to him was, ‘Do you know we have a drink named after you?’ ‘You have a drink called a ?’ the grasshopper replied. That night I made the grasshopper my partner and we renamed the inn Ted’s. Ted became one of the barman and people flocked to see him. The business then boomed, bringing all sorts of customers, some of them quite interesting.”

“One night we had a short guy order two ‘gaggle of gears’ for him and his mate. He then spent the night on his big mate’s lap. It was so weird. Plus he literally didn’t know how to drink – everything he drank he spilt down his front. The big guy spilt a lot too, especially when his little mate was telling a joke. Gee, the little guy was funny, a real wag. He did a trick where he’d spin his head 360 degrees. It was hilarious – until his head popped off and bounced into the dessert buffet. It was horrible – there was splattered jelly and custard everywhere. Oh, the inhumanity! It was about then we realized the big guy was a .” 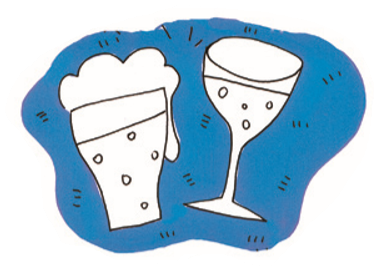 “Another odd customer we had was a doctor who had a routine he liked to follow meticulously. Every night precisely at 6 o’clock when he arrived, Dick, our other barman had to have a chilled daiquiri ready and waiting. It would be exotically flavored with dockory, a rare and expensive herb. The doctor would drink it and leave, never uttering a word – until the day the bar ran out of dockory, forcing the barman to substitute an alternative exotic flavor. He didn’t tell the doctor, who immediately queried the barman after tasting it. ‘Is this a dockory daiquiri, Dick?’ ‘No, it’s a ’ the barman replied.” The doctor said he liked the hickory substitute.

Cor went on to share other stories that endeared him greatly. Even Grizbut became spellbound by his charm, and for a nano second, she regretted they were now apart. No one noticed except Lunii. Cor was given a massive applause when he finished.