Suddenly a scream followed by a loud ‘pop’ echoed everywhere. At that moment, a live missile came hurtling out of the hut straight at Grizbut’s head. It was Larry the psycho goldfish. His lips were puckered up as he prepared to apply his famed death suck on Grizbut. Grizbut’s reflexes kicked in and she maneuvered out of the way, but only just. As Larry flew by, he desperately stretched his lips to reach her face, but to no avail. Instead, he landed in a near-by pond. 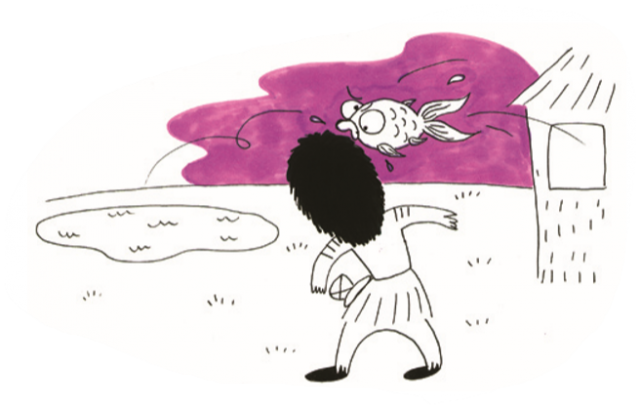 Concerned, Grizbut rushed into the hut to find Lunii backing away from Hannigar. “What were you thinking?” roared Hannigar at Lunii as she chased her. “YOU USED A CROWBAR ON MY BUTT!” Lunii was apologetic. “It was the only instrument I could find to pry the fish off.” Hannigar snapped and launched into a maniacal tirade. “A CROWBAR IS NOT A MEDICAL INSTRUMENT. ANYTHING THAT IS USED TO LEVER TYRES SHOULD NEVER BE USED ON SOMEONE’S BUTT! A CROWBAR AND A BUTT ARE NEVER SUPPOSED TO MEET. IT’S A LAW OF THE UNIVERSE: THE IS ALWAYS OFF LIMITS TO THE . AAAAAAHH!”

Having impressively vented her anger, Hannigar fell silent and was soon calm enough to accept Lunii’s apology. She explained to Grizbut what happened when she’d woken up. “That psycho fish gave me the shock of my life. I fell out of bed, and went and sat on the throne. I was half asleep when he ambushed me. It was such a rude awakening.”

As Hannigar was only badly bruised, Grizbut went and looked at the pond. She made a note to ban swimming there. Until Larry was caught, the water wouldn’t be safe.