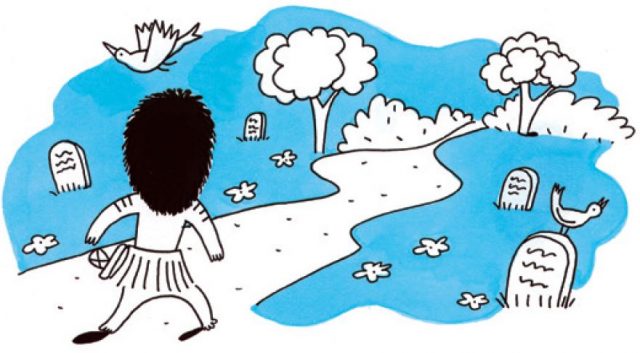 With a few hours to spare before the opening ceremony of the Golympicus Games, the Wise One decided to pay homage to an old friend.

The tribe’s Sacred Cemetery Garden was a beautiful place, where the remains of many deceased warriors were buried. The garden was lush and green, full of bird life and a peaceful energy that honored Grizbut’s fallen comrades. In the garden’s midst grew a 4,000-year-old tree that was so tall the last person to climb it got sickness. This giant tree constantly grieved for those departed warriors who rested in the shade of its outstretched arms. The tree was a .

Grizbut had come to give homage to a warrior called Gerthicus. This warrior had led a great life serving her tribe with honor, though for a while she did have a cruel nickname among the men of Amazonia. They had called Gerthicus the “widow maker”, and this was because her first four husbands had met with untimely deaths.

Her first husband was a great guy and a fantastic cook. Unfortunately he was also a hemophiliac who tried as a cure. She buried him days later. Gerthicus’ next husband had an exciting occupation. He hunted ghosts and cleared haunted houses. Sadly, he also suffered from nerves and tragically died after being scared half to death – . They had been married four months. Spouse number three was so stubborn; he refused to accept help from anyone. The first time he got sick, he bought himself a self-help book on medicine. He died of a .