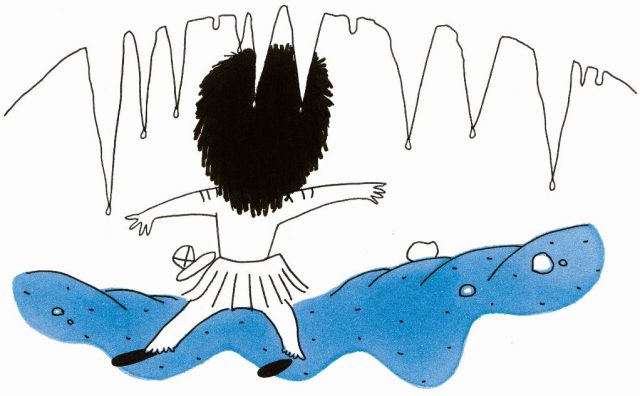 Dawn was breaking outside as Grizbut made her way carefully through the giant Cave of the Boyng. Moving in natural fluorescent light, she was heading for a room at the end of the cave where some famous and powerful weapons called the Azac were stored. They were the Amazonian tribe’s symbols of power and like every tribal chief before her, Grizbut was their keeper.

To protect the Azac from thieves, Grizbut’s ancestors had left some safeguards in place. A warrior first had to pass through an endless labyrinth of tunnels known as the maze. This was so named because many people swore they’d been there before, although they actually hadn’t, getting them lost in the process. The warrior who made it through alive then had to pass through the Cave of the Boyng, where they encountered a deadly curse.

If a droplet of water hanging from the cave’s stalactites was disturbed by someone moving, the droplet turned into a floating head that attacked the person. If the head managed to touch the person just once, it was rewarded with a torso and legs. If it touched the person again, it gained arms. If it managed to slay the warrior, it could leave the cave and roam the maze as a monster. The slightest movement of air dislodged these deadly droplets. The only way a warrior could pass through the cave, was to move incredibly carefully.

This was what Grizbut was now patiently doing. She was also resisting the urge to run her hand over her face to see if it was back to normal. When the Wise One had woken up, she’d looked in the mirror and seen nothing but horizontal headlines. Although harmless, it was a look she could do without. She wouldn’t be sleeping on a pillow again.