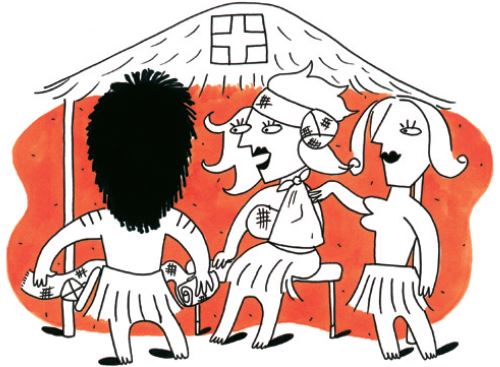 Grizbut and Lunii checked their injuries. Nothing too serious, just cuts and bruises. The two girls grabbed the MAC chest, plus some other Azac weapons, and headed out. As they departed, a minor aftershock shook the maze, causing the two girls to walk a little more briskly. Both felt good to be alive.

Outside, a familiar face greeted them as they exited the maze. It was Special Crime Investigator Barrelis. She was injured and was missing her ears and a finger. Grizbut and Lunii rushed Barrelis to a nearby first aid hut, where they tended her wounds.

Barrelis was soon feeling better, and told the two tribal elders what had happened. “Last night someone forced entry into the downtown police station and stole all the . The police have nothing to go on,” she lamented. “So at 0600 hours I went to the station to help the investigation. The streets were deserted except for a man. He was carrying a dog in a bag. I confronted him. I asked, ‘Someone has been stealing canines. Where did you get that dog?’ The suspect said he had purchased it from a street vendor. The suspect then admitted he was aware it was a .”