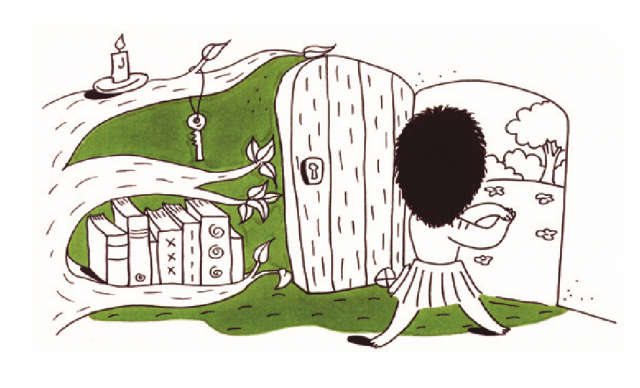 It had been a very long day so when Grizbut finally got home her bed had never looked so good. But it was, after all, a special bed.

The bed was part of a magnificent tree that her ancestors had built the official tribal chief’s residence around. The tree grew in a courtyard in the middle of the house. From there some of its lower branches went off into different rooms, and using The Old Ways, Grizbut’s ancestors had employed those branches for different purposes. The kitchen featured one long branch, which was flat and wide enough to prepare food on, like a bench. The main dining room had a similar branch that served as a table. It was flanked by two smaller branches that were benches to sit on. The walls featured branch bookshelves. But the best part of the house was Grizbut’s bed. It was a long flat branch shaped like a bed that boasted a mattress of thousands of tiny sturdy leaves. It was an incredible bed to sleep on. But the bed did have the occasional drawback, as Grizbut was about to be reminded.

She had been asleep for a couple of hours when she was awoken by the sound of crunching. She opened her eyes. Inches away was a pudgy caterpillar, munching on her mattress. The two eyeballed one another. The intruder started to back away slowly, but too late – Grizbut scooped it up and put it out in the garden. Grizbut smiled to herself as she remembered a similar, though worse, incident. One early morning she’d been woken with a shock by a in her bed, loudly using its pecker. But at least it got rid of a few stray ants.