As Grizbut presented the game trophies, she hurried up as the crowd was restless. It was time to pull a surprise on them. “Because of all the cancellations due to the storm, I’ve come up with some extra entertainment you should all enjoy.” She paused, making sure she had the crowd’s attention. “I propose to do something I call the apple and rice bravery test. But first here are the people I challenge to join me. I challenge Nero, Leader of Lool. Do you accept?” Nero pushed through the crowd and nodded. “I challenge General Scarg from Denargia. Do you accept?” General Scarg accepted – he had little choice in front of the thousands gathered. “Thank you,” Grizbut said. “Amazonian Tribal-Elder Lunii will run this bravery challenge. There is now a table and three seats in the middle of the sports ground. I invite you both to join me there, and everyone else is invited to watch.”

Grizbut and the challengers joined the excited crowd as they moved to the center of the ground. Grizbut found herself walking next to a patient’s husband she’d been treating. “Markus, how is Greglia? I haven’t seen her for a while.” Grizbut asked. “She wanted to come today,” said Markus, “But she’s home dying.” Grizbut was shocked – she’d been treating the woman for a cold. “That’s sad news,” Grizbut said compassionately, thinking of ways to help. “It’s sad all right,” said the husband clearly disappointed. “I wished she would stay a .” (Author’s note: That’s right – I won’t be that either!)

Grizbut got a guard to give him an atomic wedgie. 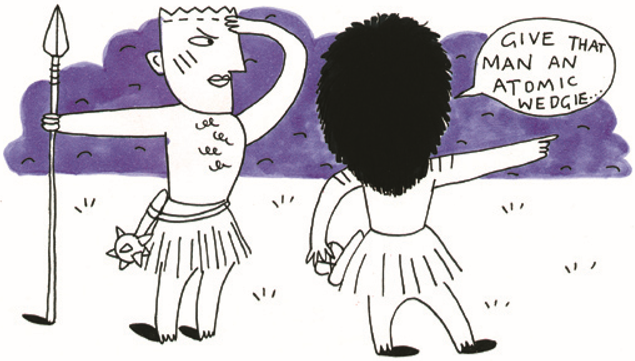